Who is Smiling Pug?

Winston Wilbur
Burnaby, British Columbia, Canada
"I am a happy pug therefore.... I am a smiling pug"! My mum is called Smilingpug... after me! Because of her love of animals and nature, she is a Buddhist and a vegetarian (thank god). She is most inspired by the Dalai Lama. We live on the West Coast of Canada and I share my home with my two older feline sisters Tika and Kizzy and my NEW little brother Sam Cooper who... is all the way from MidSouth Pug Rescue in Tennessee!! I am 11 and I don't walk to well anymore, but that doesn't mean I don't get around! Welcome to my blog.

We remember and learn some history

Well after our post of us proudly wearing our poppies many, of our American bloggers were curious about the significance of the poppy. So here is a short history.
Remembrance Day is symbolized by an artificial poppy that people wear (traditional within Countries that are part of the Commonwealth). The use of the poppy as a symbol of remembrance comes from a poem written by John McCrae, a Canadian doctor serving in the military. It is one of the most frequently quoted English-language poems composed by front-line personnel during the First World War . As mentioned above, it was written by John McCrae, a doctor serving in the Royal Canadian Army Medical Corps. The poem is called In Flanders Fields and describes the poppies growing in the Flemish graveyards where soldiers were buried.

In Canada, poppies are distributed by the Royal Canadian Legion and the Anavets organization usually from Nov 1 - Nov 11 each year. One must make a small donation in order to receive a poppy. The donations received go towards war veterans.

In Flanders Fields
In Flanders fields the poppies blow
Between the crosses, row on row,
That mark our place; and in the sky
The larks, still bravely singing, fly
Scarce heard amid the guns below.


We are the Dead. Short days ago
We lived, felt dawn, saw sunset glow,
Loved, and were loved, and now we lie
In Flanders Fields.


Take up our quarrel with the foe:
To you from failing hands we throw
The torch; be yours to hold it high.
If ye break faith with us who die
We shall not sleep, though poppies grow
In Flanders Fields.

Now on the note of Remembering, we would likes to takes time to keep in our thoughts, some individuals who have touched our hearts.
One is mummy's friend's husband. He is a helicopter pilot. Currently he is off in Afghanistan flying a helicopter, full of supplies, between the different American bases over there.

The next person is my pug luv, Tuni's dad. He is in the Navy. The girls were hoping that their dad will be home with them today so they can all snuggles. I hopes they are snuggling right nows. Here is a pic of me, Dickens with Tuni's dad. 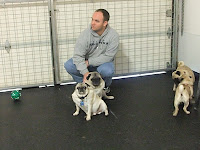 last but not least is our friend Stubby.
Now I know he is not a war veteran but.... he is a veteran in his own little way. You see he has not been well lately. He gave his momma a scare the other day. He seems to be doing better today and I am sure part due to everyones prayers. We do think he is a fighter and deserve to be mentioned. Not only do we remember the fallen, the war heros, the veterans.... but we also remember our friends in need. The ones that need the prayers to get through the day. 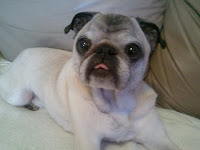 Well, looks like it is just about
the 11th hour of
the 11th day of
the 11th month
Gotta goes and participates in a minute of silence.
Peace outs
Winston Wilburs
Posted by Winston Wilbur at Thursday, November 11, 2010

Count down until our Mum's Birthday!

Count down to Winston's Birthday

Count down to Kizzy & Tika's Birthday

Translate us to French or Spanish!

We are West Coast Canadians! 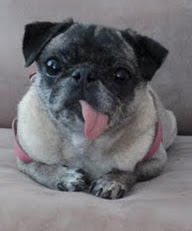 Tune in when..... Smilingpug Investigates 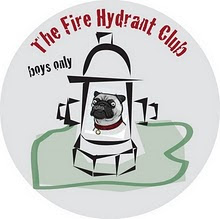